One of the most enjoyable parts of the research project on stigma and power which I am currently working on, has been collaborating with two artists, Charlotte Bailey (with whom I have co-produced a graphic essay to be posted here very soon) and Tom Morris, with whom I have produced this “Stigma Machine” GIF (Tom did all the hard work translating my ideas).

I am currently writing up the opening chapters of my book Stigma Machine, and in due course will add some notes here to explain the meaning of this GIF and the process of its creation with Tom – but as some of you guessed (when I shared this GIF on twitter) it is inspired (in part) by Franz Kafka’s short story ‘In the Penal Colony’ (1919).

Kafka’s ‘In the Penal Colony’ recounts the ethnographic adventure of a European explorer who, on visiting a French penal colony in the tropics, is given a demonstration of an elaborate writing machine which tortures people to death by repetitively tattooing ‘whatever commandment the prisoner has disobeyed’ upon their body. This machine is made up of three parts, the Bed, on which the condemned man is chained face down, hanging above this is the Designer which contains cogs and mechanisms which drive the Harrow, a glass armature studded with needles. The Harrow shuttles between the Bed and the Designer on a steel ribbon and tattoos the judgement onto the body. As the officer in charge of the machine explains to the explorer, the Harrow begins by tattooing the back of the condemned person, ‘when it finishes the first draft of the inscription’ the machine’ turns the body over, to give the Harrow fresh space for writing’.  As the explorer discovers, within the judicial “state of exception” of the Penal colony, prisoners are not informed of what crime they have committed.  There is no hearing, no judge, no opportunity to stage a defence: ‘Guilt is never to be doubted’.  Rather, the prisoner becomes slowly ‘enlightened’ to the nature of their crime by deciphering the text as it is etched ever deeper into their flesh. ‘You have seen how difficult it is to decipher the script with one’s eyes; but our man deciphers it with his wounds’.

In my forthcoming book Stigma Machines, Kafka’s graphic torture machine is employed as a guide for tracing alternative genealogies of the concept of stigma — which extend –as this GIF suggests to the current authoritarian turn in global politics — and the role of media corporations in this process…

‘In the Penal Colony’ has inspired much artistic reflection and production, from the track ‘Colony’ penned by Ian Curtis on post-punk band Joy Division’s album Closer (1980), to an Opera written by acclaimed US composer Philip Glass (2000), to `Iranian film-maker Narges Kalhor’s short film Darkhish (or The Rake) (2009) —in which Kafka’s machine is reimagined as representing the barbarism of contemporary Iranian prison regimes.

Like many of Kafka’s novels and short stories, ‘In the Penal Colony’ has also been the subject of intense theoretical reflection (see for example, Theodor Adorno, Walter Benjamin, Michel Foucault, Jean-Francois Lyotard, Jacques Derrida,  Gilles Deleuze and Felix Guattari, Edward Said, Gorgio Agamben and Judith Butler, George Steiner and Bertold Brecht). Deployed as an ‘analogy for the contemporary field of power’ (Butler, 1999), ‘In the Penal Colony’ has been used in particular to theorise historical and contemporary judicial “states of exception”, from Nazi Concentration Camps, to the Israeli occupation of Palestine and the US penal colony at Guantanamo Bay (see Danchev, 2006).

However, as Margaret Kohn (2003) has argued, many artistic and theoretical engagements with ‘In the Penal Colony’ frequently display colonial amnesia, despite the fact that this is a story ‘marked and saturated’ with ‘colonial motifs’, from the title of the story, to the political theatre of the scene– and its location (a desert, the searing sun) — to racist depictions of the condemned man — (animal-like demeanour, allusions to cannibalism) and his inability to ‘understand a word’ of what was being said as `he doesn’t speak French’ (Kohn, 2003).

In a careful historical account of the probable contemporary sources which inspired  Kafka’s ‘In the Penal Colony’, Paul Peters draws our attention to a cartoon in the October 1907 edition of the then popular German satirical magazine Simplicissimus (see below), which depicts a British officer feeding an African man into a giant vice –which squeezes gold out of him while a missionary “enlightens him” by reading from a Bible. As Peter’s notes, this is an image:

which profoundly resonates with Kafka’s torture machine, as a metaphor for the ‘vast procedure of extermination’, in which native populations where ‘exposed to unbounded and horrific “punishments’, by the apparatuses of colonial power.

Certainly, the political anatomy of early Twentieth Century European colonialism was imagined by both Kafka and by the Simplicissimus cartoonist, as ‘a machine like no other’ (Kafka), a violent assemblage, etched into the bodies of subjugated peoples and nations and from which ‘streams of blood and streams of money’ flowed..

Perhaps the grotesquely violent machine of colonialism was, from Kafka’s perspective in 1914 already ‘obviously disintegrating’ (Kafka) as it became increasingly evident that ‘its peaceful action was an illusion’  (Kafka) … at the end of ‘In the Penal Colony’, it is the officer, not the prisoner, who is killed by the stigma machine.. and the machine breaks down in the process.

More on stigma machines to come …………. 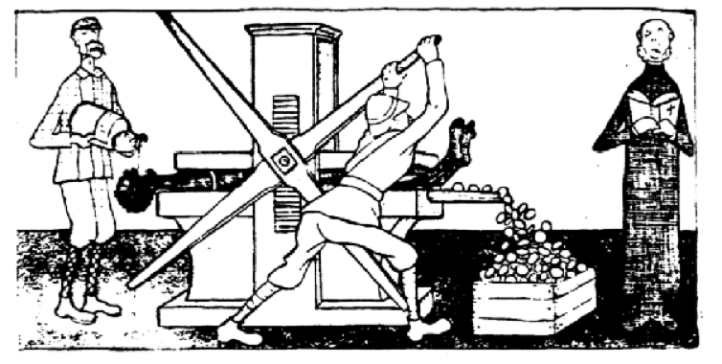